Fashion goes bananas — and apples and grapes and oranges too

Fruit-bowl fashion looks more stylish than ever thanks to textiles made from apples, bananas, mushrooms and more.

“You probably know that putting lots of fruits and vegetables in your body is good for you, but what you might not know is that putting more fruit and veg on your body in the form of leather-alternative fabrics could be good for the planet.

Boston-based technology research firm Lux Research forecasts annual sales of low-complexity leather alternatives, which include fruit- and vegetable-derived materials as well as recycled-material leathers, are likely to hit $1 billion by 2025 driven by a combination of consumer demand and technological advances. They’re currently “in the double-digit millions,” according to Lux senior research associate Tiffany Hua.

Hua also notes that demand for more complex materials like those made from mycelium — essentially mushroom “roots” — is on the rise although annual sales of around $500,000 aren’t likely to notch the $1 billion mark in 2025 barring unforeseen advances in mycelium technology.

It turns out some of that technology — and a lot of that increased demand — has roots in the Golden State.

“I think it’s the mentality in California,” said Helga Douglas, founder of the L.A.-made label Svala, which makes accessories using leather-alternative materials like cork, Italian vegan leather and a pineapple-leaf fiber called Piñatex. “They’re very interested in wellness and sustainability, so they’re always searching for brands and products that are made from alternative fabrics.” She said the Golden State accounts for 20% of her sales — 15% coming from Los Angeles and 5% from the San Francisco area. (New York and Texas aren’t far behind, she said.)

Douglas has noticed an uptick in demand for — and overall interest in — these kinds of ahead-of-the-curve materials since launching her brand in late 2017. “I see online, not just with my brand but other brands as well, people tend to get really excited about the fruit leathers — the Piñatex, the apple leather,” she said. “It’s definitely increased.”

Emmanuelle Rienda, who launched Vegan Fashion Week in L.A. in 2018, agrees with Douglas about SoCal’s key role in driving demand. “Los Angeles is very advanced in terms of animal rights,” she said. “Its consumers are very aware and very conscious about these things.”

In anticipation of the foodstuff-derived fashion we’ll all wear soon enough — and in celebration of L.A.’s outsize role in bringing these innovations from farm to closet — here are some of the ways to wear your USDA-recommended five to 13 servings a day. That doesn’t mean sporting a towering turban à la Carmen Miranda or dressing like a grape cluster from a vintage Fruit of the Loom underwear commercial.

The pomace and peels left from the apple-juice manufacturing process have found a second life in a leather-like material that’s been used for a few years in luxury-level footwear and accessories, including L.A.-based Von D Shoes’ Echo heel ($210, from tattoo artist and reality star Kat Von D’s vegan shoe brand), which launched on World Vegan Day in 2019. More recently, Danish timepiece brand Skagen introduced a line of watches with apple-leather straps ($125), and Volkswagen is set to roll out an electric car with an interior appointed in apple leather.

A partnership between Swiss accessories brand Qwstion and Taiwanese yarn and weaving partners has turned banana-plant fibers from the Philippines into a waterproof technical fabric called Bananatex. The fabric has been used in furniture coverings, minimalist bags ranging from fanny packs ($80) to totes that convert into backpacks ($350) and unisex sneakers, the latter through a collaboration between London-based Good News and Swedish fast-fashion giant H&M. Bananas, right? 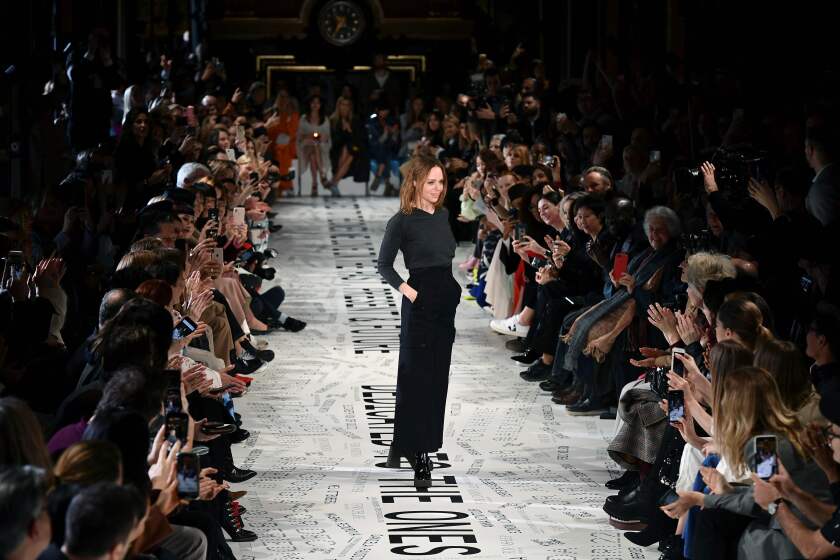 L.A. label Clae claims to have created “the very first cactus leather sneaker,” $150 versions of its Bradley silhouette that marry natural rubber soles to uppers made from sustainably harvested prickly pear cactus leaves. The leather-like material is the creation of Mexico-based textile maker Desserto, which also supplied H&M with the cactus-based faux leather used in acid-green sandals ($129) and strappy bracelets ($39.99) that hit retail April 1 in the U.S. — and quickly sold out. 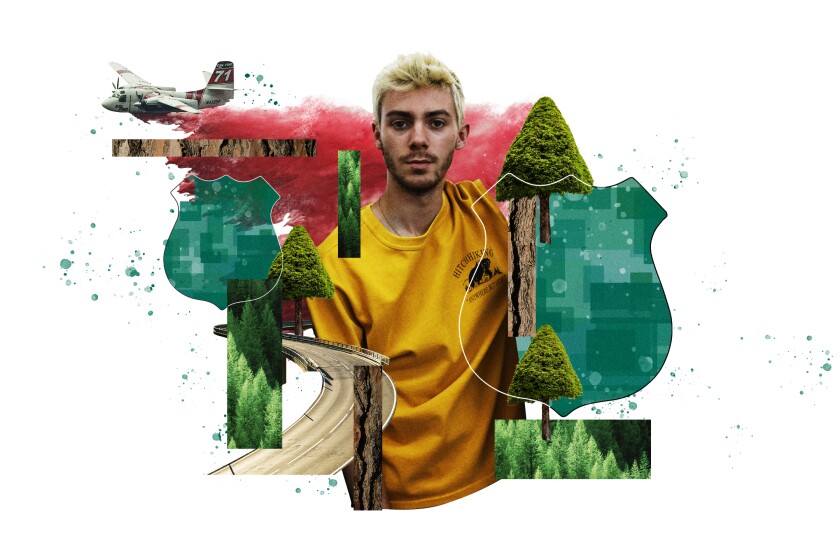 Stomping grapes is out but stomping around in grapes is in thanks to Vegea, a 3-year-old Milan-based company that’s found a way to use the stalks, seeds and skins left behind when the juice is squeezed out to make wine. In March, luxury etailer Mr Porter stepped up its footwear game by using the leathery material for the uppers of an eco-friendlier version of its Larry sneaker ($335). The so-called wine leather has also been spotted on the fashion runway (specifically in the fall and winter 2020 Marni ready-to-wear collection); in small bags (by French accessories brand Maison Peaux Neuves); and appointing the interior of a 100th anniversary Bentley concept car.

High-end, animal-alternative leathers got a ringing endorsement in March when news broke that French fashion house Hermès, a luxury label that built its name on leather goods (it began in 1837 as a harness and bridle business), had partnered with Emeryville, Calif.-based startup MycoWorks to create a version of its briefcase-like Victoria bag. It uses a lab-grown material made from a thready, branching fungus called mycelium, grown in California and sent to France to be tanned. (Think of mycelium as the “roots” and mushrooms that sprout from it as “fruit.”) While there’s no availability date or price tag for the ‘shroom-based bag, it’s safe to assume it’ll cost some serious cabbage since calfskin versions start at $4,900.

MycoWorks isn’t the only company — or even the only company in Emeryville for that matter — working to make mycelium a go-to material for the fashion-forward eco-conscious set. In April, German sports shoe and apparel maker Adidas announced a concept shoe — a version of its iconic Stan Smith sneaker — that will use Mylo, a mycelium-based material created by another Emeryville-based biotechnology company called Bolt Threads. Another Adidas collaborator, Stella McCartney, has created a few one-off pieces using the fungus-based vegan leather (“a black bustier top and utilitarian trousers,” according to a recent report in fashion-industry trade paper WWD). Bolt Threads announced in October that its partners also included French luxury conglomerate Kering and yoga-gear maker Lululemon. 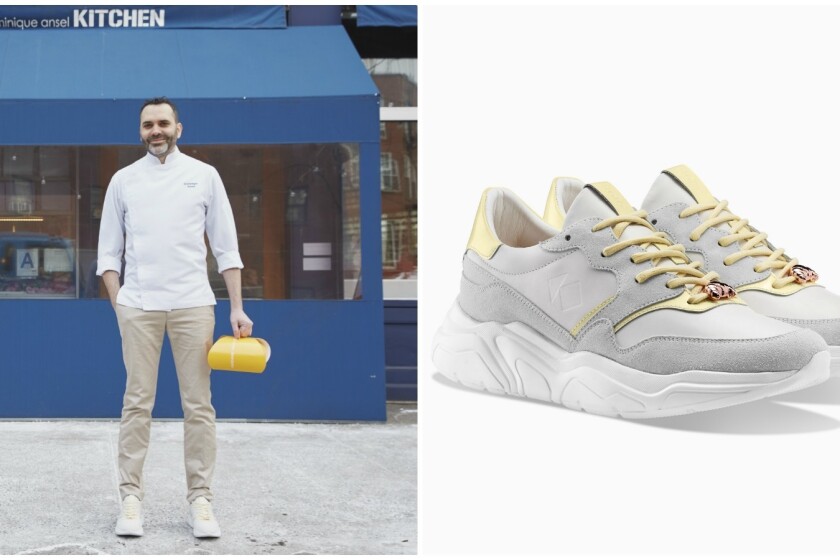 Italian company Orange Fiber has developed a way to spin Italy’s citrus-juicing byproducts (an estimated 700,000 tons is generated annually) into a silk-like cellulose yarn. Over the last several years, it has found its way into wearable items including a capsule collection with luxury label Salvatore Ferragamo (launched on Earth Day 2017) and, two years later, an off-the-shoulder boho-style top for fast fashion (a 2019 H&M collection).

What can be done with the long, fibrous leaves left to rot after pineapples are harvested? Why not turn them into fabric? That’s the origin story behind Piñatex, which has been used to make uppers for sneakers (Hugo Boss and Paul Smith); stylish clutches, handbags and totes (by accessories brand Svala); and a designer trench coat from London-based designer Mariam Al Sibai‘s fall and winter 2020 collection (£799 or approximately $1,109 at current exchange rates).

Fruits and fungi aren’t the only ones with skin in the pantry-to-runway game. Vegetables are getting a seat at the table too. U.K.-based Chip[s] Board has perfected upcycling cast-off potato peelings (supplied by frozen foods company McCain) into a bioplastic called Parblex that’s been used to make experimental frames (in collaboration with eyeglass maker Cubitts) and chunky dress buttons (by British textile designer Isabel Fletcher). The Parblex buttons have also found their way onto sofa cushions, which you’ll have to admit gives new meaning to the phrase “couch potato.”