Europe has entered a new year and a fresh political storm is already raging across the continent.

The European Commission took the first steps toward labeling natural gas and nuclear energy as green energy sources under the EU taxonomy, a technical rulebook that identifies sustainable activities that contribute to the green transition and comply with the Paris Agreement, in the final hours of 2021.

The outcry was swift and ferocious: Greenpeace slammed the proposals as a “licence to greenwash,” while Austria threatened the administration with legal action. The Commission maintained its stance, claiming that the green badge will only be transitory since gas and nuclear will serve as “transitional” technologies toward a carbon-neutral future.

The venomous reaction tainted the credibility of the EU taxonomy, an innovative tool that was formally accepted six months ago to assist private and public investors in making educated decisions regarding climate-conscious investments.

The catalog includes a large list of projects that provide a “major contribution” to at least one environmental goal of the EU’s climate policy while avoiding considerable harm to any of the others. Solar energy, geothermal energy, hydrogen, wind power, hydropower, and biofuels are now included.

However, when Brussels unveiled the regulation in April, two sectors were noticeably absent: natural gas and nuclear energy. The delay was attributed to long-standing and deep-seated debates among EU member states on the future of the two contentious resources.

On one side of the table, a group of nations, led by France, strongly defends nuclear as a low-carbon, reliable, and independent energy source capable of compensating for the deficiencies of renewable systems, ensuring consistent supplies, and reducing price volatility.

On the other hand, Germany, with the assistance of Austria, Denmark, Luxembourg, and Spain, opposes the proposal, claiming that worries about radioactive waste, whose life-cycle spans several thousand years, are sufficient to rule out nuclear as a green alternative.

However, Germany, like many other EU nations, relies significantly on natural gas to cover all of its energy needs and fill the void created by the steady phase-out of coal, the most polluting fossil fuel. Although natural gas produces lower CO2 emissions than coal, the process frequently leaks methane, a strong and harmful greenhouse gas.

Although the deployment of renewables has increased across the EU, natural gas still accounts for more than a quarter of total energy output, making its abolition in the short future all but unthinkable. The EU imports the vast bulk of its gas from third-party sources, leaving member states subject to market volatility and with significant geopolitical repercussions.

For the past few months, the European Commission has been plagued by the taxonomy conundrum, with EU nations issuing public letters and statements to make their points. Civil society also put pressure on the executive, urging its president, Ursula von der Leyen, to defy member-state lobbying and uphold the promises embodied in the European Green Deal.

In the end, the Commission chose a course that would satisfy both sides of the discussion while preventing the formation of a blocking majority (at least 20 EU nations representing at least 65 percent of the bloc’s population).

“Taking into consideration scientific advice and current technology advances, as well as varied transition obstacles between member states,” the executive stated in a news statement.

According to a leaked draught, Brussels has stressed that the two energy sources must adhere to “clear and rigorous requirements,” such as high safety standards for nuclear reactors and a maximum of 270g of CO2 per kilowatt-hour for natural gas facilities. Gas stations must obtain a building permit by December 31, 2030, although nuclear sites can wait until 2045.

The decision must be examined by a sustainable finance expert committee and is likely to be accepted by the end of January. The EU co-legislators, the Council, and the European Parliament will have four months to review the text and voice their concerns.

The talks are expected to be contentious and acrimonious.

In Germany, the new three-party coalition’s environment minister, Steffi Lemke, said the inclusion of nuclear energy in the taxonomy was “completely incorrect.” Luxembourg’s energy minister, Claude Turmes, termed the proposal a “provocation,” while his Spanish counterpart, Teresa Ribera, said the measures “make no sense” and send the “wrong signals” about the EU’s green transition.

Meanwhile, Austria has already vowed to sue the Commission if the plan is implemented. Natural gas and nuclear power “are damaging to the climate” and “damage our children’s future,” Austrian Climate Protection Minister Leonore Gewessler stated on Twitter.

To complicate matters further, the Commission’s decision coincides with the French presidency of the EU Council, which is slated to take over the first six months of the year and so assume responsibility for leading the contentious negotiations.

Although this standard is not often followed in reality, the nation that holds the rotating presidency is intended to act as a neutral mediator between competing perspectives.

‘When nobody was watching’

The new twist in the taxonomy contrasts sharply with the green discourse espoused by the European Commission — and, by extension, the whole European Union – in recent years.

President von der Leyen launched the European Green Deal shortly after her arrival in Brussels, an ambitious action plan to drastically restructure the bloc’s economy and attain carbon neutrality by 2050. Von der Leyen and her staff have instilled the Green Deal idea in every aspect of EU policy, including the €750 billion coronavirus recovery fund, which requires member states to invest at least 37% of their budget in climate projects.

However, civil society organizations have cautioned that the current measures have a significant danger of damaging the EU’s environmental credentials in the eyes of EU people and the rest of the world community.

“Polluting industries will be overjoyed to obtain the EU’s license to continue destroying the world by burning fossil fuels and manufacturing radioactive waste,” said Greenpeace EU project director Magda Stoczkiewic. “The Commission has demonstrated a scandalous disrespect for the climate problem, environment, and European citizens.”

Other environmental organizations, including the World Wide Fund for Nature (WWF), the European Environmental Bureau, and Friends of the Earth, joined Greenpeace in condemning the Commission’s proposals as “greenwashing at its finest.”

The Climate Action Network Europe (CAN Europe) argued that natural gas is incompatible with the Paris Agreement’s goal of limiting global warming to 1.5°C and that nuclear power violates the taxonomy’s principle of “do no harm” due to “environmental and social hazards at all stages of its supply chain – from mining to nuclear waste disposal.” 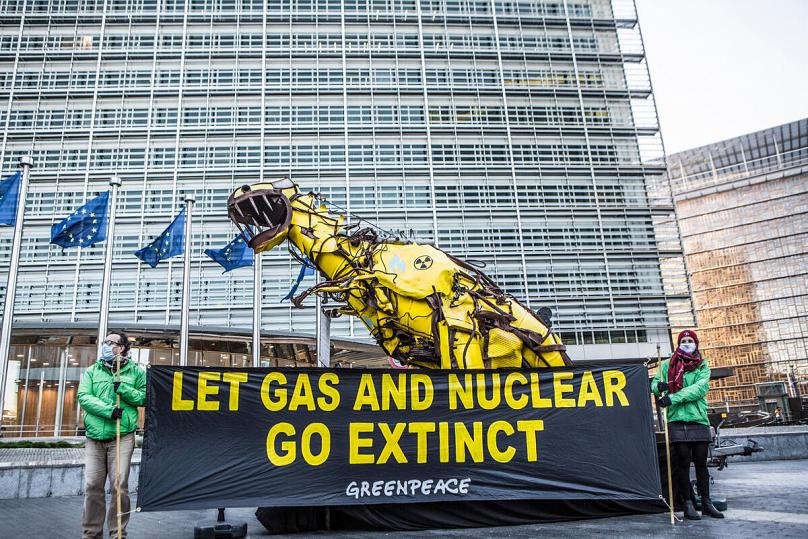 FORATOM, a Brussels-based trade organization representing Europe’s nuclear energy industry, supported the Commission’s proposal and advocated for a name other than “transitional.”

“We do not feel that nuclear should be classed as a transitional technology because it clearly supports to climate mitigation aims and does not cause more harm than any other power-producing technology that is currently taxonomically compatible,” a FORATOM representative stated.

Eurogas, a gas industry organization, emphasized the critical role natural gas would play in the continuing coal phase-out and advocated for “realistic starting points” in emission thresholds, recommending an initial limit of 350g of CO2 per kilowatt-hour for power plants.

“We are confident that the taxonomy will stimulate the mixing of renewable or low carbon gases with natural gas,” said a Eurogas representative in a written response to Euronews.

The substance of the Commission’s recommendation was not the only source of criticism: the timing and procedure surrounding the decision also drew harsh criticism from civil society.

The European Consumer Organisation (BEUC) chastised the Commission for releasing the proposals on New Year’s Eve “when no one was looking,” for neglecting to publish the draught for public comment – a “very abnormal step” – and for allowing the expert panel less than two weeks to provide its view.

“This end-of-year surprise demonstrates the Commission’s trust in its own proposal,” the organization stated in a statement.

A global approach: Why the aviation industry needs to work together to reach net zero