SLTT (Small Lens-type Tidal Turbines) – The buoy and power generation are separate, and a diffuser is installed around the turbine. In addition to protecting the turbine, the diffuser has the effect of increasing the flow of water for better power generation. 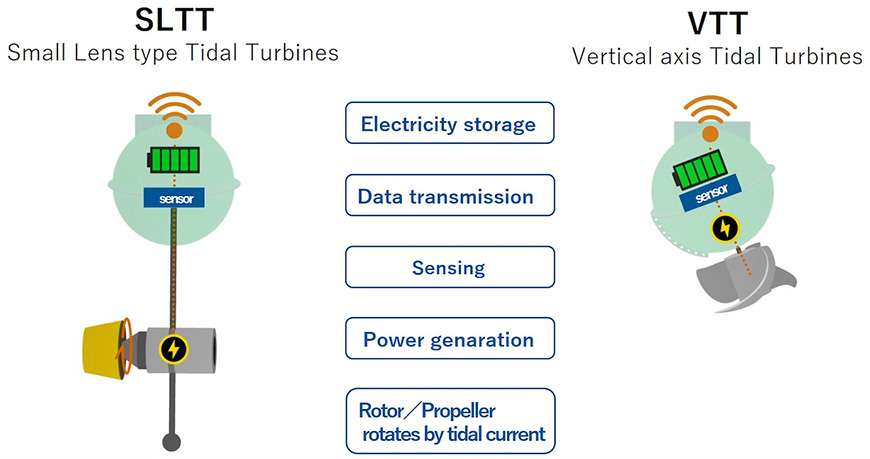 * PAL Co., Ltd., and Shinei Kogyo LLC., both of which are based in Nagasaki City, cooperated in the prototype manufacturing of the buoy.

■Pilot Test Results in Sea
Nagasaki University and Kyocera conducted a pilot test for nine days during spring tide to low tide in the tidal cycle. The test used 21 sensors to collect data which was then transmitted to the cloud, including acceleration, temperature, and humidity (using geomagnetic sensors inside the buoy), water temperature, flow velocity, current direction, battery current, and voltage (using an external electric current sensor)
The average amounts of electricity generated and consumed during the experiment were:

■Future Initiatives
To promote ongoing ocean monitoring, the companies are planning to support a water temperature-salinity sensor (temperature, salinity, and electrical conductivity), chlorophyll turbidity sensor (chlorophyll, turbidity, and water temperature), DO sensor (dissolved oxygen and water temperature), and an underwater camera. Performance and operation will be improved, along with a reduction in size and weight, in commercial versions. Kyocera will also build an IoT platform to store collected data, and ongoing testing will be conducted mainly in Nagasaki Prefecture.”