“In February of this year, Kentish Council in north-west Tasmania approved a Development Permit Application from Dulverton Waste Management. The permit allows the company to upgrade its existing compost facility and provide best practice leachate and odour control. Development plans include the construction of an industrial compost cover and associated mechanical equipment to better manage aeration and moisture of the existing compost windrow operation.

According to Matthew Layton, Dulverton Waste Management Project Manager, the improvements will control the effect of rain on organic input material, which includes council green waste and industry input stock from across Tasmania. “We get 1000 millimetres of rain a year down here, which is very different to a lot of facilities on the mainland,” he says.

100,000 tons annual throughput
Dulverton, which in addition to its organics facility operates an award-winning landfill, collectively process upwards of 100,000 tonnes of material annually through an open windrow composting system. “We’re a regional facility, so unlike many mainland composters, we need to accept everything in our region. That includes product residues from food manufacturing and green and municipal waste,” Matthew says.

He explains that the industrial compost cover is just one development in a three-stage facility upgrade plan. Stage one, he adds, was the purchase of a specialised windrow turner with irrigation, which began operating on Dulverton’s existing open-air compost piles in January.

The Komptech Topturn X63 compost turner, purchased through Australian distributor ELB Equipment, has a throughput of up to 4500 cubic meters per hour. The combination of a large drum with thrower blades and powerful drive ensures the turner leaves a well-mixed windrow in its wake. 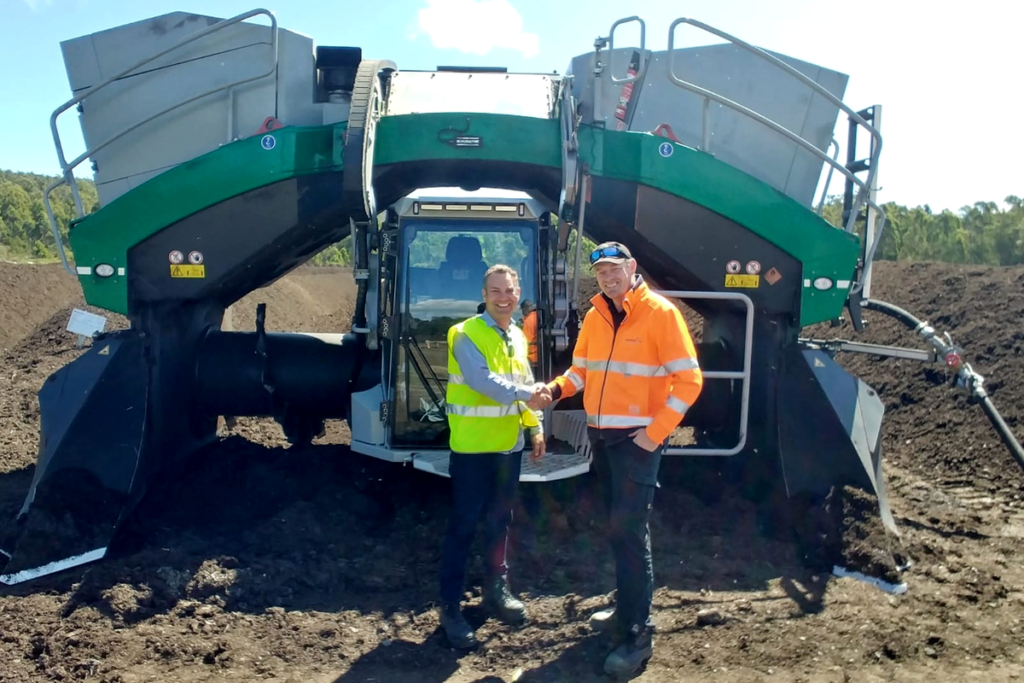 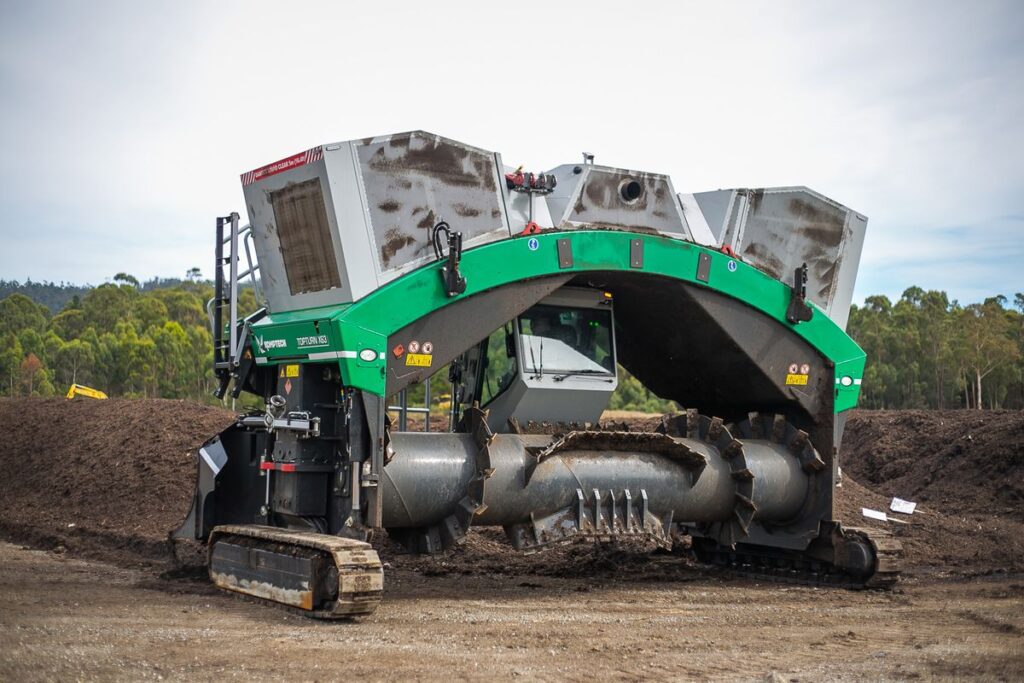 Compost turner replaces excavators
Before acquiring the Topturn, Matthew says Dulverton used a traditional excavator to turn its compost piles. With a view to consolidating cost and making its processes as efficient as possible, Dulverton went to market to look for a suitable turner to replace its excavators. “In the lead up to our facility expansion, we wanted to ensure our operations were more cost-effective and efficient,” he says.

“There are a number of turners on the market that could achieve that, but we went with the Topturn primarily because of the service support in regional Tasmania. There was also the added benefit of parts commonality, especially with the engine.”

The Topturn’s engine meets all relevant emissions standards, with a new cooling system keeping everything cool even under heavy loads and high outside temperatures. Komptech’s X63 features a large-dimensioned turning drum for high throughput and complete mixing, with easy maintenance access via ladders and platforms integrated into the body.

Topturn increases efficiency
Since operating the Topturn, Matthew says Dulverton has seen a dramatic increase in turning efficiency. “We’ve seen changes in our processes for the operators working with the machine, and also in the biology of the compost,” he explains. “Not only is the process faster with the Topturn, but it also creates a better composting environment by introducing air throughout each compost windrow. We are achieving material shrinkage rates that hadn’t been seen previously through conventional turning.”

A key feature of Dulverton’s Komptech Topturn is the ability to add a lateral displacement device at a later stage, Matthew says. He adds that in the future, this will give operators the ability to turn and move more compost at once. When coupled with the turner, the lateral displacement device minimises transport distance and improves viability and monitoring. By collapsing two windrows, the rot shrinkage is smoothed out, making full use of the space.

“We expect this equipment will continue to deliver environmental benefits by providing full aeration and moisture-balance of the compost to assist the natural decomposition process,” Matthew says. “The windrow turner will continue to be used throughout our upgrade program.”

The Topturn purchase, Matthew says, was Dulverton’s first commercial dealing with ELB. “They’ve been really good from a client support perspective, particularly in terms of information sharing and guiding us to where we needed to be,” he adds. “They also offer significant after sales assistance, which really supports the way we’re trying to modernise our facility.”